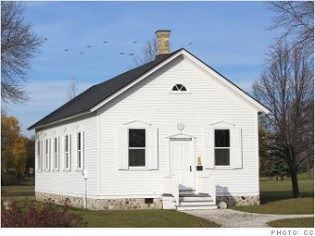 Do you have any archival items regarding the Village (photos, maps, etc.) that would make great additions to the society's collection? Would you like to join the Brown Deer Historical Society and learn more about our local history?

Email the Brown Deer Historical Society and let us know.

Become a member by submitting our admission form.

Society meetings are held the 3rd Thursday in January, April, July and October at the Lois and Tom Dolan Community Center at 6:30 pm.

Be sure to check out our current Brown Deer Historical Society newsletter (PDF) for programs, membership and contact information.

The Brown Deer Historical Society Newsletter is the most authoritative and complete history of this community. It includes many great images, family and business histories, and lost or forgotten places. This digitized collection is full-text searchable.

A Glance at Brown Deer's Past

Adapted from Brown Deer Then and Now - published by the Brown Deer Historical Society, 1998.

Brown Deer, according to one of its village fathers, was settled first by the Yankees, then the Irish and then the Germans. The Yankees were Easterners who moved into the territories in search of farm lands.

The mouth of the Milwaukee River and lands north suited the agricultural needs of the early settlers. A fertile and well-wooded land, it beckoned to men eager to draw homes and crops from the earth. The nearby and growing city of Milwaukee promised to provide a market for farm and dairy products, as well as wood and lumber.

In 1835, the first settlers began to drift into the Brown Deer-Granville area of the Wisconsin Territory. WW. and WC. Woodward were the first of record. A handful of men who came from Granville, NY., gave the township its name… meaning large city. In 1838, twenty-six men - the total male population - helped Thomas Faulkner raise a log barn.

In 1841, the original towns of Lake and Milwaukee were divided into seven townships of about 36 square miles each. The township of Granville was situated in the Northwest corner of Milwaukee County, bounded on the west and north respectively by Waukesha and Ozaukee Counties, Milwaukee township on the east, and Wauwatosa township on the South.

In the northeast corner of this township, a small community developed which the residents called Brown Deer.

There is much speculation as to how Brown Deer got its name. Legend has it that a deer jumped through a saloon door and broke up a card game in progress - hence, the name Brown Deer! Local families give their versions, also. Included among them are the following: When the Schulenburg home was being built in 1887, a brown deer stuck its head in the window; Jack Kihnau's father was building a bard when a brown deer looked in through the window; and John Ehlers put a sign on Schweitzer's Saloon that said, "Braun Hirsch - Brown Deer." However, the name Brown Deer had been established in the area long before these happenings occurred. (Anson Buttles' great grandfather's correspondence in 1873 mentions his granddaughter Kate Buttles teaching school at "White Deer," and she actually was teaching in the first log schoolhouse in the Brown Deer area.

The first town meeting was held in 1842, the population then totaling about 225. Electors resolved to pay town officials $1 per day, and they elected 14 officials.

The Township of Granville map of 1876 shows the thread-thin lines of section roads criss-crossing the township, tiny dots marking homes, and the labeling of each farm.

Also marked is the East Granville Cemetery. This land, on the corner of Good Hope Road and 43rd Street, was acquired from the Hassels' acreage in the 1840s for use as a non-denominational cemetery. The little church around which the cemetery grew was of Methodist denomination. Stanley Neilson's uncle, Dr. Walter Neilson, and some members of the doctor's family were buried there. The cemetery was moved in 1969 to make way for the widening of Good Hope Road. Since there were no survivors of the Cemetery Association, the Village Board was given trusteeship, and it granted permission for the county to move each grave.

Growth continued gradually without the character of the area altering until the post-war exodus to the suburbs was marked with major subdivision growth occurring in 1955. Industrialization came to Brown Deer when Badger Meter Manufacturing Company moved into the area in 1951.

The move to incorporate Brown Deer into a village was begun in September, 1953. For years residents of the community had talked about incorporation, but took no formal action. The proposed area of incorporation contained 1.8 square miles and more than 1,300 residents. Boundaries of the proposed village were Milwaukee-Ozaukee County line on the north, River Hills and the Milwaukee Road track on the east, West Bradley Road and West Calumet Road on the south, and a line extending north on North 51st Street on the west.

The Circuit Court held a hearing on the application of the incorporators. At this hearing the City of Milwaukee opposed application, and a trial was held, on the issue of whether or not the Village of Brown Deer should be incorporated or whether it should remain Town of Granville territory subject to annexation by Milwaukee. The trial court ruled against incorporation, but was reversed by the Wisconsin Supreme Court. Thereafter, the Circuit Court ordered that a referendum be held on the question of incorporation. At this referendum, the people of Brown Deer voted overwhelmingly in favor of incorporation, thus creating the Village of Brown Deer and making it a municipal corporation on January 20, 1955.

Then began the epidemic of annexations and counter moves by Brown Deer and Milwaukee. Five small annexations were successfully completed by Brown Deer in 1955. Then in 1956 five more areas were annexed to Brown Deer: the Corrigan area (10.5 sq. mi., pop. 1,500) and the Johnson, Laun, Brown Deer Park, and Tripoli Areas - totaling 22 square miles in all. The City of Milwaukee contested these last five annexations and began consolidation proceedings to acquire them. Litigation was finally terminated in 1962, when the Wisconsin Supreme Court awarded the Tripoli Area to Brown Deer and the rest of the contested areas to Milwaukee. Brown Deer was reduced to its present 4.5 square miles. Chief Justice Currie, in his dissenting opinion, characterized the loss of contested areas as a "serious miscarriage of justice," and the people of Brown Deer were greatly disappointed.